In the chapter A Mad Tea Party from Alice's Adventures In Wonderland, the Rev. Dodgson looks to have created a scene that depicts the sort of chilly reception and regretably poignant impressions one might experience upon visiting a church service among an unfamiliar congregation. In so doing characterizing foibles that at all times have tended to distance the established church, and churchiness as a whole, from the ideal of church. That is, underlining the all too prevalent outsider's perspective on what ought to be an attractive and refreshing get together, instead being turned backward into something offputting and disquieting. 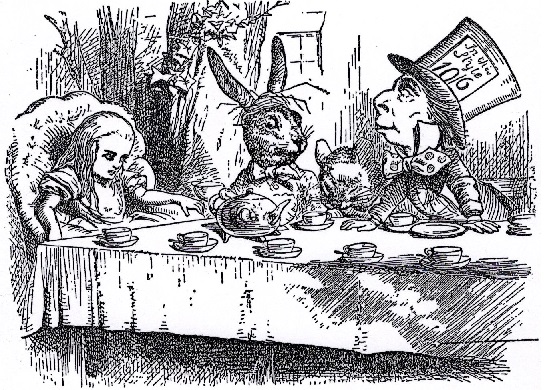 At the end of the previous chapter, the Cheshire Cat assures Alice, who's wandering and doesn't know where to turn, that for a start she could pay a visit to the locale of the Hatter and March Hare, without being forward or giving offense, because: "we're all mad here." That is to say, they might represent a specific denomination of church, but we all have being as God's children, with minds inadequately sensible of a higher power. However, when Alice finds them having tea at a long table on the lawn outside the Hare's house, and takes a seat at one of the several empty places,

"It wasn't very civil of you to sit down without being invited," said the March Hare.

- Objecting that it is intrusive for someone who hasn't been solicited for membership to act as though on equal terms with the established congregants.

"I didn't know it was *your* table," said Alice; "it's laid for a great many more than three."

- Alice replies that God's table is open to all, and that after all, it's supposed to be God's church and not theirs.

"Your hair wants cutting," said the Hatter. He had been looking at Alice for some time with great curiosity, and this was his first speech.

- As is so often the case, the reaction to her introduction is one of looking for something of which to accuse her and with which to find fault.

"You shouldn't make personal remarks," Alice said with some severity; "it's very rude."

- Suggesting that as we're brothers and sisters, we should show more kindness to each other.

The Hatter opened his eyes very wide on hearing this; but all he *said* was, "Why is a raven like a writing- desk?"

- At the implication of a claim to being a sister in the faith, the Hatter puts forth a challenge in the form of a test of doctrinal comprehension.

"Come, we shall have some fun now!" thought Alice. "I'm glad they've begun asking riddles. -- I believe I can guess that," she added aloud.

- Alice feels she can make an attempt to express her idea of faith when put to it, and is prompted to phrase it in conjunction with the principles mentioned by the Hatter.

"Do you mean that you think you can find out the answer to it?" said the March Hare.

- The Hare is dismissive of even that assertion of spiritual capacity, saying: "You don't believe, you think; and you don't guess (eg interpret), you find out/ are taught."

"Then you should say what you mean," the March Hare went on.

- Alice maintains she can do both at need, whereupon the Hare derides a lack of the intellectual rigor necessary to attain to truth, and questions whether she can know what she's talking about.

- The Hatter seizes upon a maleability in her selfassurance, thinking: "Aha! Now we can try to turn her 'I believe I can guess that' into 'I guess I can believe that' (ie believe what we feel is proper for her)."